There was a time when the term “school morning” was a negative thought in my mind, mostly it was rushing sleepy kids through their morning routine. What changed was simple. I started getting them up 45 minutes earlier. Now, we have all the time in the world and it’s so relaxing and peaceful. And here’s another thing I love about that. Instead of deleting those 45 minutes out of their night, we tacked it on the other end. I love that hour or two at night when I still have kids, but am basically off duty.

Back to those extra 45 morning minutes… I don’t use the extra time to feed them a full course breakfast. We do quick breakfasts. I’m going to make a list of what a common school morning breakfast would be around here, from most frequent to seldom.

Now that I think of it, eggs & toast would be a quick breakfast too, but that’s pretty much just a weekend thing for some reason for us. I mostly don’t make their breakfasts, they usually get it themselves. I made it this morning though… Baked Oatmeal. They love baked oatmeal. I posted baked oatmeal back in 2008 and someone said in the comments that she microwaves it for a quicker breakfast. I tried it and it doesn’t have the crunch, but tastes just as good. And it cuts 30 – 40 minutes down to 7 or 8 minutes. And that’s why it made the “quick breakfasts” list.

I just switched to using the recipe below instead of the one from 2008 because I like this one better. They’re very close, the only differences are that this one has cinnamon and a different salt quantity. 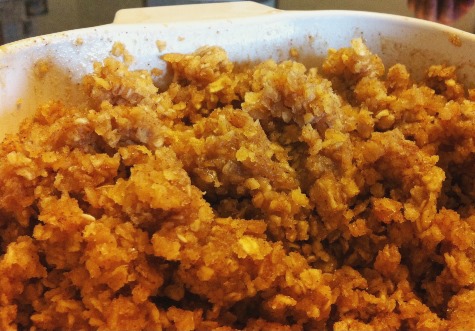 In a mixing bowl, combine all the ingredients. Spoon into a greased 9″ square baking pan. Bake at 350 for 40 – 45 minutes. Or microwave 7 – 8 minutes, stirring every 3 minutes. Serve warm with milk. Yield: 6 – 8 servings. You can also add fruit to it… apples are my favorite. 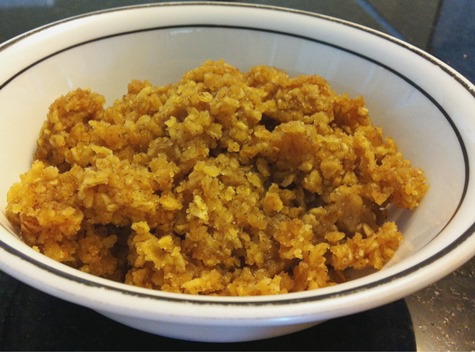 What do you serve for breakfasts? Do you have quick ideas that I missed up there?
And if you usually cook full course breakfasts, I’m impressed! I remember one time in my teen years, I stayed with my friends Sheila and Heidi overnight. Her mom cooked a big breakfast and then they had cold cereal as dessert… they didn’t call it dessert, she just served it like you would dessert (cleared some main dishes and plates away and put cereal and bowls on the table). I still vividly remember how floored I was when the cold cereal appeared. I was so stuffed after that meal! My friend said that was a normal breakfast, but breakfast was the biggest meal of the day at their house. They were farmers.