This isn’t going to be an entertaining post with pictures and all. It’s more of a helpful post. We need to have some balance here. Not all fun and games and eating and pictures.

I guess I’ve never really put a game on here… I could though, one time I saw a bar recipe and a letter was piped on each bar and they made a crossword out of it. And I’ve also seen a meat and cheese checkers game. And one of the neatest looking things I’ve seen was square cakes frosted white and oreo cookie halves stuck on them in a pattern so the cakes looked like dice.

Warning: Sudden change of subject. I used to cook pasta and be dumping the uncooked stuff into the water and then dump in more, thinking it surely wouldn’t be enough. As it cooked, it grew and GREW and I’d end up with enough pasta to feed an army! Then, I found this info, and I haven’t cooked way too much pasta since. But I still dump in the uncooked stuff and think ‘Surely that won’t be enough’, but it always grows and sure enough, it’s enough! I know, it says on the package how much cooked uncooked makes, but it seems to always have it in ounces!

Or I would be crushing crackers crumbs with a rolling pin and empty the crumbs into a measuring cup, crush more, empty them, until I had enough. And then sometimes I crushed too many and had to decide what to do with the leftover crumbs… throw them away or throw them in.

Or I’d need 1/4 cup of lemon juice and want fresh-squeezed juice, so I’d go to the store and not know how many lemons I’d need to make 1/4 cup. So I’d buy 4 or so, just to be safe (I only did that one time, then I had a better idea of how much juice one lemon makes after that).

So, I hope this info helps you as much as it helps me! These measurements might not be exact, but it gives a ballpark idea anyway.

And while I’m at it, I might as well throw in some more equivalents that I’m sure you all know. But these still come in handy when your mind goes blank… blank like mine did this morning when I made coffee and after awhile was wondering why I didn’t smell it and when I looked at the coffee pot, there was clear water in it instead of coffee! Shannon said ‘the problem with coffee is that you need it first in order to be awake enough to make it’, or something like that… it didn’t sound as confusing when he said it.

I actually forgot what I was supposed to be writing here and had to go up and check… more equivalents:

And from there, you’re on your own.

Posted on April 10, 2008
Filed Under Substitutions and Equivalents, Thursday Thirteens

I would really do well to live beside a grocery store. Somewhere that you don’t have to even cross a street to walk to it. Then, I could nickel and dime my checking account to death instead of giving it heart attacks with big grocery bills every week. There are people who live in houses that close. I envy them and wonder if they just run over when they need something or if they plan ahead, keeping their cupboards stocked and keeping a perpertual grocery list on the fridge for a once a week run.

Our grocery store is at the end of Main Steet. It would also be close enough to live on Main Street, above one of the stores. I still remember when I first found out that people live up there. I was 9 or 10. Every time after that, when we’d drive down Main St, I’d be looking up, not around. And dreaming of living up there one day, preferably in the one above the fudge shop. I’d sit out on the deck and watch the world go by and nobody would know I’d be watching because who looks way up when you’re shopping on Main St?! To be honest, I still look up there when I’m on Main St. Not because it’s still my dream to live up there, just because it still kind of intrigues me, I guess. I even took a picture of it a couple months ago, since I was on Main St with my camera anyway… 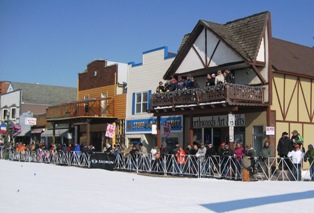 The street is snow-covered because the Birkebeiner Ski Race was going on… that’s why I was on Main Street with my camera. Looks like someone is hosting a Birkie party on their deck up there.

Anyway, since I don’t live in town and don’t plan my menus in advance, my big laminated ‘Ingredient Substitution Chart’ comes in handy pretty often. This is one time when I won’t run out of ideas before getting to #13… I could easy do a Thursday Thirty-three today!

I’ve tried substitutions on my own. Some of them worked, like substituting blown up marshmallows for marshmallow creme in this dip recipe. Others failed, like the time when we were first married and my brothers were overnight guests. My oldest brother is diabetic and late that night, I suddenly thought about it that I have nothing in the house for breakfast for him… no bacon, no English muffins, no eggs to make eggs or pancakes with, only sweetened cold cereal. Then, I thought about it that I could make biscuits from scratch and sausage gravy. In the morning, to my dismay, the sausage I thought I had happened to be hamburger, so I decided to try to spice it up to make mock sausage. Fast-forward about 20 minutes… my brothers are in the kitchen eating and as I’m walking towards the kitchen, I hear my younger brother (who’s back is toward me) mutter, “This is gross.” as my other brother gave him a ‘shut up, she’s coming’ look. They never said anything to me about it… I guess they knew not to attack a new cook on her cooking. I don’t remember if I hadn’t test-tasted it first or what, but I did later and yeah, he was right, it was gross.

1. When you’re out of unsweetened chocolate, for every ounce or square that is called for, substitute 3 Tbsp. cocoa and 1 Tbsp. fat or oil.

2. When you’re out of cornstarch (for thickening), for every tablespoon that is called for, substitute 2 Tbsp. flour.

3. When you’re out of whipped cream, chill a 13 oz. can of evaporated milk for 12 hours, add 1 tsp. lemon juice, whip until stiff, and measure according to recipe.

5. When you’re out of garlic cloves, for every clove called for, substitute 1/8 tsp. garlic powder.

6. When you’re out of flavored gelatin, for every 3-oz pkg called for, substitute 1 Tbsp. plain gelatin and 2 cups fruit juice (then omit the water you’d normally add to a 3-oz pkg).

7. When you’re out of fresh herbs, for every Tbsp. called for, substitute 1 tsp. dried.

8. When you’re out of lemon juice, for every tsp. called for, substitute 1/2 tsp. vinegar. But don’t do this for lemon meringue pie!

11. When you’re out of fresh onions, for every small onion called for, rehydrate 1 Tbsp. minced onion.

12. When you’re out of shortening (for use in baking), for every cup called for, substitute 1 1/8 cups butter or margarine and decrease salt in recipe by 1/2 tsp.

And if you’re out of the substitute items (for example, no cottage cheese on hand to make the sour cream that you’re out of), I don’t know what to do about that either. I guess make something else or go to the store.

Don’t forget to go visit other Thirteeners over at Thursday Thirteen!