You know how actions speak louder than words? These very cupcakes pictured here are a case in point of that. I made these one morning and what do you know, some utility guys came to replace the telephone pole out in our front lawn that afternoon. After they were here for awhile, I put a bunch of cupcakes on a glass platter, locked the dog in the garage, and took the cupcakes and a little table out, offered them as I was setting them on the table, and said I’ll just leave them out here, eat as many as you want.

There were 3 guys on the crew.
They ate almost all of them.
Or maybe they took some for the road.
Anyway, that has got to be one of my favorite things. Making a lot of something and seeing it get inhaled. 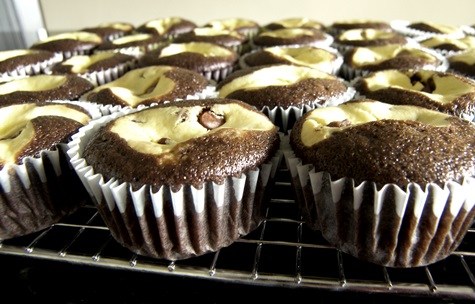 They also did rave about them when they brought the platter and table to the door before they left. So, there were words, too. But the actions spoke louder.

3 cups flour
2 cups sugar
2 tsp. soda
1 tsp. salt
1/2 cup cocoa
2 cups water
1 cup oil
2 Tbsp. vinegar
2 tsp. vanilla
Combine all dry ingredients in a bowl. Add water, oil, vinegar, and vanilla. Mix together until smooth. Here’s a tip for if you’re in a hurry… use a cake mix instead of mixing the cupcake batter from scratch. Fill cupcake papers 1/2 full. I made a note that says I used my biggest scoop for the cake part (which would be the Pampered Chef large scoop) and a heaping regular spoon for the filling. Put 1 rounded teaspoonful of filling on top of each one. Bake at 350 for 22 minutes. The recipe says 20-25 min, but 22 min was perfect for my oven. Makes 34 cupcakes. 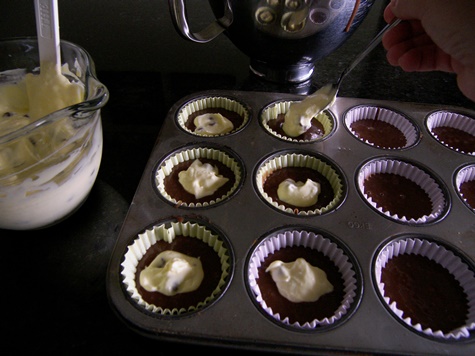 You don’t need to drop the filling in all neat and stuff. Let them have some character. Imperfect perfection. 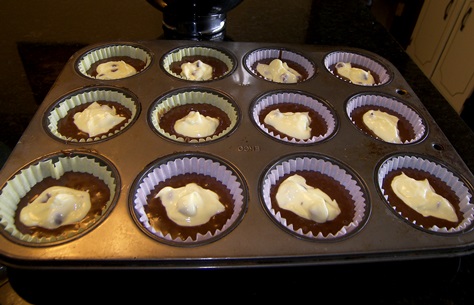 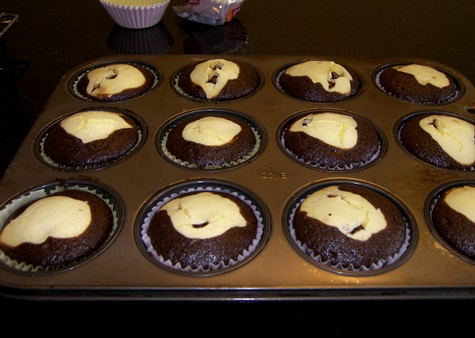 They come out of the oven all puffed up like this. ^^^

And then as they cool, they kind of go down a bit in the middle.

And last, but not least, I have a little note by my recipe that says “165 calories each if makes 34.” I’m pretty sure I must’ve figured that out for a friend. Because why would I be eating cupcakes if I was on a diet?!