It sounds like it’s Saturday morning right now. It’s not. It’s Thursday afternoon. But I do love Saturday mornings… 24/7 year round. I’ll tell you my secret for loving them: I kinda do whatever I feel like doing for the morning… drinking a few extra cups of coffee, reading, baking, playing Two Dots, etc., and not let myself be bothered with the 101 things I should be doing.

Last Saturday morning, I felt like making French toast. I had seen a French toast recipe in a cookbook awhile ago when I was looking for something else. It grabbed me because I was surprised there was a recipe for French toast… I thought everyone just did a ratio of about 1/4 cup of milk per egg, dipped the bread in, and fried it up. But this recipe had extra ingredients in it. Like, cinnamon and vanilla. Mmmmm!! 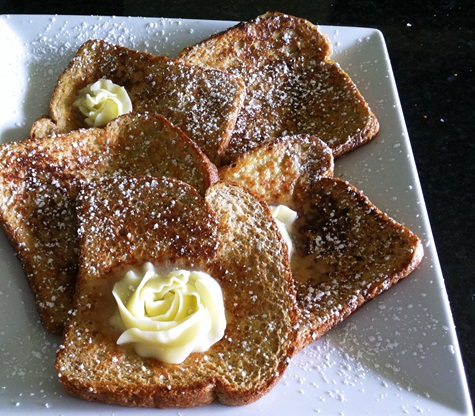 French Toast …recipe from Simple and Satisfying cookbook
3 eggs, beaten
3/4 cup milk
1/4 tsp. salt
1/2 tsp. cinnamon
1 tsp. vanilla
2 Tbsp. sugar
11 slices bread (or however many slices the mixture covers, this was only enough for 8 pieces, but maybe my letting them soak for a second was why)
butter, for frying

Mix together all but bread and butter. Dip bread into mixture. Fry in butter until golden brown, turning once.

You know what I loved about this recipe? While the French toast was frying, my kitchen smelled a.m.a.z.i.n.g! Of cinnamon and vanilla.

The recipe also has a Stuffed French Toast variation where you spread cream cheese on one slice of bread and jam on the other, put them together like a sandwich, dip the sandwich into the egg mixture and fry it. I’ve gotta try it sometime!

Also, for the first time ever, I made homemade butter. That is what is on top of the French toast up there. And I used buttermilk from the butter-making for the egg mixture. I felt so domestic.

It also took me back to when I was a kid again… my mom used to make it often, and I loved watching.
The reason it’s piped into roses is because after it was made, it was just a boring lump. And it was so creamy that I wanted to make it pretty. 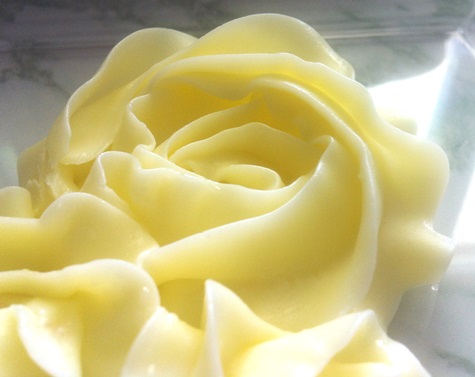 I’m not going to feature the butter here because… Jessie at The Hungry Mouse already did an amazing job of featuring it, with great directions and tips and pictures. So, go there for your instructions if you want to make it, that’s what I do! You’d be surprised how easy butter making is! I’m not planning to always make it because easy as it is, it’s still easier to break open a box and peel off a wrapper, but I am just happy to have the option of doing it.