Are you wondering if I’m serious? You’ll find out at the end.

I was paging through a cookbook one day last week while I was laid up with my sprained ankle. It was the same day and the same cookbook that I saw the Fudge Sundae pie in a few posts ago. Anyway, I saw a recipe titled ‘Oreo Cookies’. I read the directions and they do get flattened and I wondered if someone had actually figured out how to make them with that taste that only Oreos have and with the crunch, too. I had to try them. So, from the Cooking with the Horse and Buggy People cookbook…

Let stand 20 minutes. That’s the first directions given, but I took it to mean after everything was mixed together! Do not refrigerate. 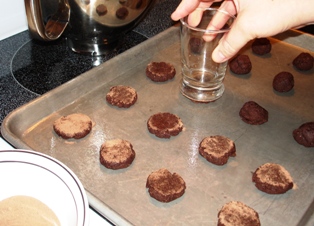 Shape into balls. Flatten with bottom of glass greased once and dipped into Nestles Quik (I think it’s actually called ‘Nesquik’) for each cookie. Bake at 300 for 8 minutes. 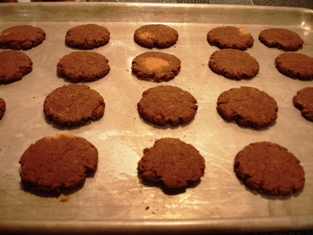 Here are the cookies right out of the oven. Yeah, they pretty much look the same as when they went in. Maybe slightly fatter.

I think I went a bit overboard on the Nesquik with a few of them. Oh well. That might not be a bad thing.

And that’s where the recipe ends, folks. No directions. This cookbook is kinda interesting that way. Sometime, I’m gonna scan in a recipe from it and see if you can help me figure it out. Usually, I can kinda go from past experience and know what to do, but there’s one recipe that sounds very yummy that has me clueless. Anyway, I mixed the filling up and spread it between 2 cookies. 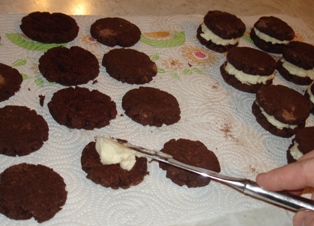 I actually ended up making the filling twice. All I have is butter-flavored Crisco, which is yellow. It makes the filling a light yellow, which I didn’t think looked too good, so I made it again and used butter instead. It turned out fine. This recipe made 25 1/2 complete sandwich cookies (51 halves). 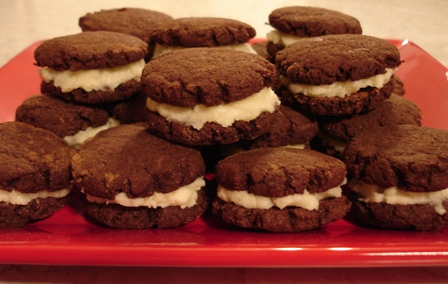 Now, our take on them: When my taste-testers (aka: my husband and girls) tested them, here were their responses: Husband, “They look like mini whoopie pies” then after tasting one, “They’re better than Oreos.” Lexi (5), “Oh, they’re so cute!” then a little later, “Mom, can I have another one?” and Tiffany (2), she didn’t say anything, she just pulled it apart, licked the frosting off, refused to eat the cookie part, and begged for another one.

They ARE cute. They were the size of Oreos, except fatter. And  they sorta had the same taste. But they didn’t have the crunch, they were soft like regular cookies, which if you ask me, when it comes to cookies, ‘soft’ is better than ‘crunch’. Some things aren’t like that though. Like chips. These cookies were a bit time-consuming to make though, for no more than food than it ended up being. Maybe if I’d make them bigger it would help.

I doubt I’ll get the urge to make them again. Like I said, “Why make ’em when you can buy ’em?”

Or isn’t that what I said?

Coming up next… the making of Tiffany’s birthday cake. So check back on Monday! It’ll be along the same lines as the other birthday cakes in the ‘Birthday Cake” category in the ‘categories’ section, so you can go look at those awhile if you want to.