Before I had any children, I decided that I want to make them special birthday cakes. Some people look at it as a waste of time. I look at it as FUN! Fun without costing alot of money.

Tiffany just turned 2. I made her a doghouse birthday cake. I used a house-shaped pan that I bought at our local Michaels store. I use the term ‘local’ loosely… the closest Michaels is an hour and a half away. It’s good I live that far away from it, I’d spend alot of time (and money) there. I’ll bet I could spend all day there (if I didn’t have kids in tow, that is).

I started with a cake mix. Pillsbury Moist Supreme pudding-in-the-mix. 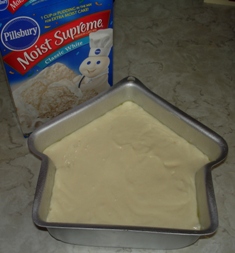 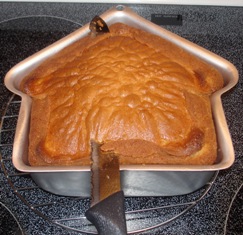 When baked, the cake fills the pan up perfectly. Cut the rounded part off the top with a long-bladed knife.

Now comes the apprehensive part of flipping it out of the pan… will part of the cake stay with the pan? Will I have to dig around at it with a knife? Will it be so bad that I have to start over and go to the store for another cake mix? Before dumping the batter in, I sprayed the pan with PAM cooking spray. Here’s how it came out! Perfect! 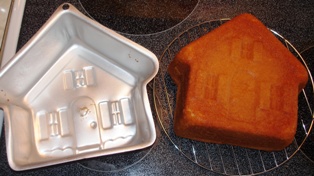 I did not wipe any cake remnants out of the pan before taking this picture. I’d definitely recommend PAM if you ever make something that needs to be baked then flipped out of the pan!

We’ve got siding on the first side now. 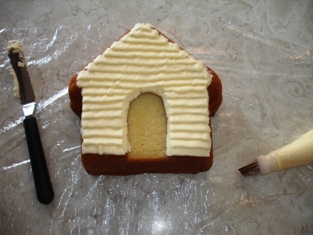 I spread frosting on the cake first to make it flat because it had impressions on there for the windows for a regular house. Um, I don’t think I’ll have to wade thro’ calls from construction companies asking me to join their siding crew! It is pretty much seamless though, so that’s good. 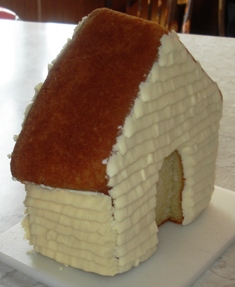 Now all the siding is on, although you can’t really tell it. 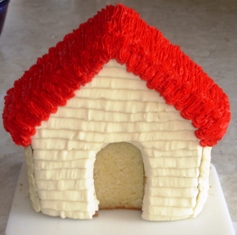 And we have a roof. 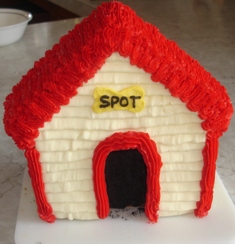 A bit more trim and a name for the dog… SPOT, yeah, I know, so original. But, any other dog name (like Maxwell, which is what Lexi wants to name her first dog) would’ve been too long to write. Rex would’ve fit good, too. My first puppy was named Rusty. He was  a pure-bred Collie. Ok, he wasn’t actually MY puppy… we had a pair of pure-bred Collies, (beautiful dogs!) and they had pups and so each of us children claimed one and named it. We had them until someone bought them. I had mine the longest and I was tickled when it was my uncle who got Rusty because I could still see him now and then. You don’t know how wonderful that was unless you know how nostalgic I am. My uncle named him Rex, so I really like that name for a dog, except he, of course, was always still Rusty to me. 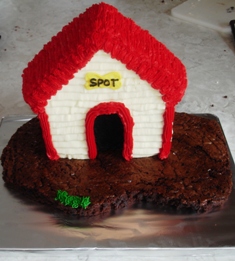 That’s brownies under the cake (made with brownie mix, of course). I’m not a cake fan, but brownies I can’t leave alone, so that layer is for me. I realized I’m in the minority because the cake was pretty much licked clean and most of the brownie layer was left. Those brownies were just a 9×13 pan, then I cut irregular borders to add a casual look to the cake. The ‘cake board’ is my cutting board covered with tin foil and taped on the bottom. I just wrapped it up like you would a gift. 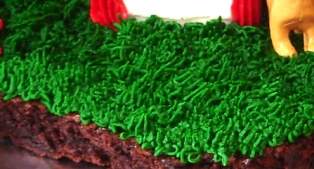 Here is a close-up of the grass. This was time-comsuming. And my hand got sore. But it looked pretty neat on there… made me anxious for Spring! It is, by the way, snowing outside right now. The grass alone took about a half hour. The entire cake took just under 3 hours.

Here are the tips I used. Started from the left: the tip for the grass, for the trim, for the little flowers in the yard which you’ll see on the finished cake below, for the roof, and the one for the siding. For the stuff that you’d think I used a round tip for, my round tip fell on the floor and got stepped on and smashed awhile ago, so instead of getting another one, I just put frosting in a sandwich bag and snip off a bit of the corner. Works great! And no tip to clean! 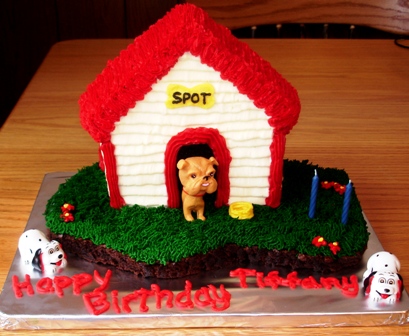 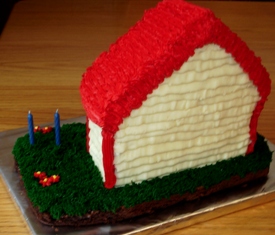 Here’s the back of it… 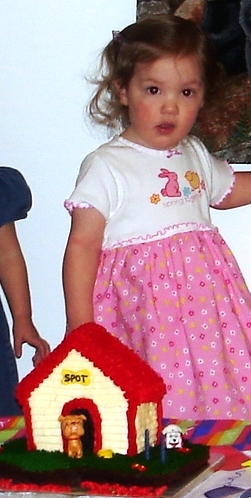 And here’s the birthday girl!

This is Tiffany’s second birthday. For her first birthday cake, I made her Lego blocks, pictured below. 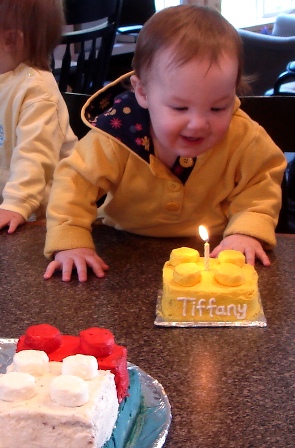 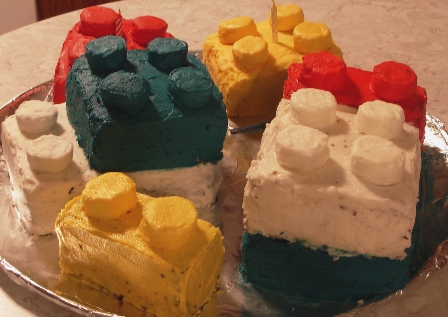 The house pan I used for Tiffany’s doghouse is the same pan I used for the house for Lexi’s 4th birthday, except for hers I put 2 together to make it a more realistic-shaped house. To see Lexi’s cakes: birthdays 1 – 4 and birthday 5.

If you ask any questions in the comments, please check back because I’ll reply in the comments. I’d also love to hear from you what birthday cakes you’ve made. And if you have some pictured on your blog, feel free to leave a link so we can go see it!