This evening, I tried to get fancy with something simple . Didn’t work. I was making finger foods for after the Bible School Program. I made layered finger jello (featured about 3 posts ago), then I thought I should take something else too. I had brownie mix in the cupboard, so I mixed it up, then to make it tastier and more attractive , I swirled melted caramel on top. I was picturing getting these bars out of the oven that were to die for… gooey, chocolate and caramel obviously swirled. I had decided that I’d better taste them before taking them because they’d definitely get all licked up at church!

Well, they came out of the oven and you couldn’t even see varigated color. Just brown. Totally dark brown. They looked very blah , like I would’ve just broke open a brownie mix box, threw in eggs and oil and baked it. So I sprinkled some p.sugar on them. Then I let them cool. When I went to get them out of the pan to put them on the plate, they majorly STUCK to the fork and I wrecked the first 5 pieces.

To make a long story short, caramel must be heavier than brownie batter because it all sank to the bottom. There was a layer of gooey caramel underneath. They are delicious though!!!! We’re inhaling the whole pan… ok, I’m not, but I am day-dreaming about doing it, and well, I had a couple small pieces.

And just to put a picture on, here they are. I know the picture is kind of a flop too, but at least it’s a picture. 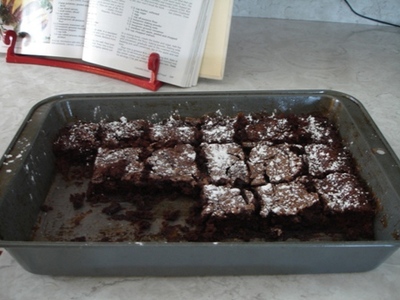 Next time, I want to try baking it partially, then drizzling caramel on top, then finish baking it. I still think it sounds like a great idea to bake caramel on top of brownies!