What a day! I got up this morning and mixed up some frosting for a birthday cake for one of the school teacher’s birthday party this afternoon.

The first thing that happened is that I splattered red food coloring on my housecoat (bummer, no more fun baking before getting dressed)… then things got worse from there. I was piping roses onto toothpicks and this being I think my first time doing that, you can imagine how good it went! I soon lowered my standards on how nice the roses had to look and the whole rose-making process went faster from there.

I went out of the kitchen for about 2 minutes for a bathroom break when Lexi said, “Mom, Tiffany got into the sugar. Oh, now she dumped some on the floor. Mom, can we play in it?” I came back to the kitchen as soon as I could and this is what I found… 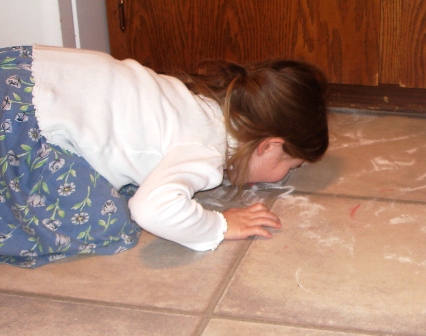 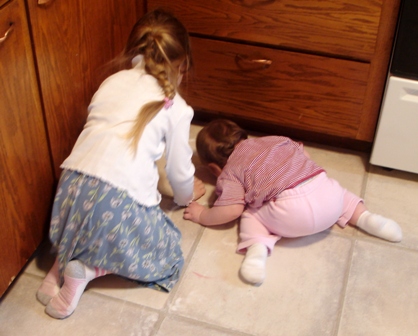 They were both licking sugar off the floor! Lexi said, “This sugar isn’t very good not on anything, but we like it anyway.” They were so sticky, so I put them in the tub while I cleaned up the floor (not like I had alot of extra time for that!). The sugar, by the way, is stored in a canister in that bottom drawer in front of them.

I had to run to Walmart because I wasn’t sure I had enough powdered sugar for all the frosting I was going through, plus I had to get ice cream, chips, and drink yet to round out the party. I got Lexi some popcorn chicken at the deli for her for lunch and as I rounded a corner in the store, I felt myself step on something at about the same time Lexi said “Oh, no!” 3/4 of her chicken had spilled and went down thro’ the holes in the cart and they were all laying on the floor behind me. I hurry picked them up, not looking around at other shoppers.

When we got home, Tiffany was kind of clingy, so while I was trying to carefully write “Happy Birthday Miss Hershey”, she was tugging at my skirt. Poor girl hadn’t had much of mom all morning. And while I was carefully and meticulously putting the flowers and leaves on, Lexi (who was standing on a chair beside me) would once in awhile lean on my shoulder and say, “That looks very beautiful!” How can you say “DON’T BUMP ME!!!” after something like that?!

Anyway, I had to leave by about 2:00 and I got done with the cake at 1:53, so it was a rush of changing the baby, getting on shoes and jackets, getting everything out to the car and when we got to the school, I got everything around, ready to go, and was as cool and composed as could be on the outside, but on the the inside it felt like I was still in high gear. On the way to the party, just out of the blue, Lexi said, “Mom, you are a very good mom.” Oh, I love that girl!!!! I said, “Oh, thankyou. Sometimes it seems like I rush us all around so much and forget to be nice.” She said, “Yeah, you do, but you’re still a good mom.”

So anyway, here’s the making of the cake…

I did the roses on toothpicks, then poked the toothpicks down thro’ a grater and a colander and pulled them out the bottom. Then, I put the roses (still on the colander and grater) in the fridge to get hard, then transferred them to a plate. 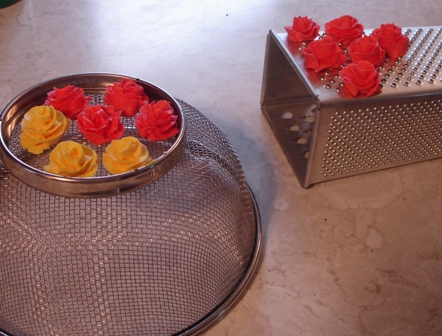 Putting the ribbon on. I had always wanted to try that, and it worked great. I did it right after frosting the sides so the ribbon would stick. 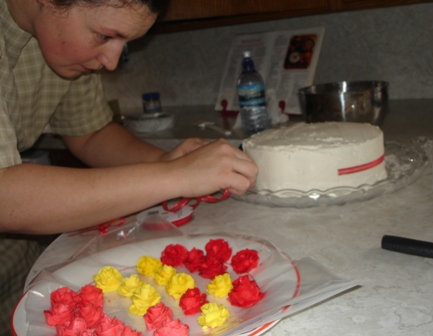 The bow is separate, stuck on there with a dab of frosting. 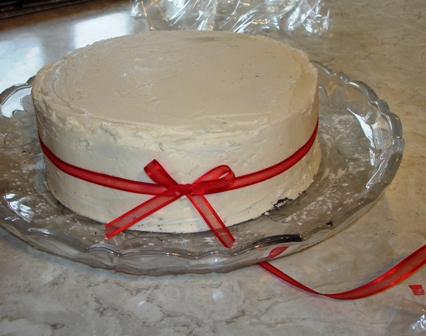 A bit of trim and some writing. The cake is starting to look promising, even though things are hectic around here. 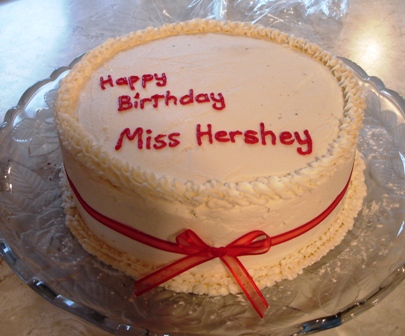 The roses are placed on… I think I made too many, but put them on anyway. 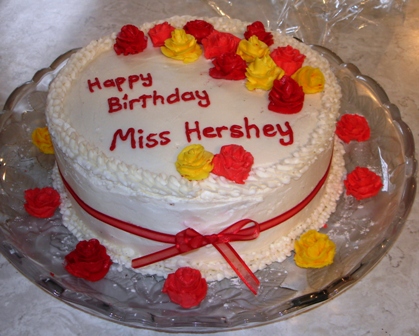 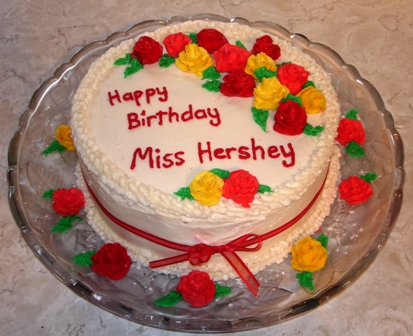 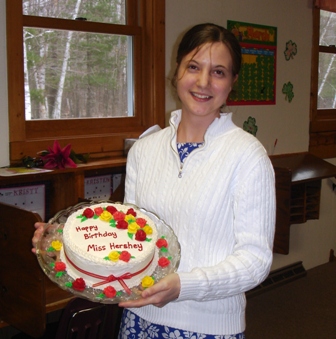 And here is our top notch 1st grade teacher.

As I was at the party among all the excitement, trying to relax inside, I realized that some things in life just aren’t worth getting stressed over. Things like a totaled kitchen waiting at home and the horror of the girls licking sugar off the floor and the spilled popcorn chicken and the bumps and tugs while decorating a cake. There’s more to life… like excitement, laughter, friends, and those 2 sweet girls I can call my own.