Grilling is my husband Shannon’s specialty. He’s got some pretty mean stuff coming off the grill sometimes! YUM!!!! One of those things is the open-faced pork chop sandwich . I asked him if he could make a ‘guest appearance’ on this site to feature them. He agreed to do it… so, here he is…

As you will see, this is not a complicated recipe. As with nearly all of my food prep related endeavors, this recipe centers around the charcoal grill. 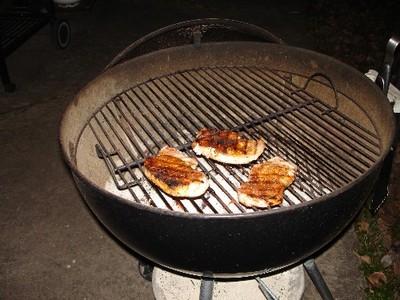 To an internal temp of 160. Pork, unlike steak, should not be done medium or rare unless the intended audience has a particular affinity for food born illness.

Step3: While chops are grilling, toast one piece of bread for each chop. 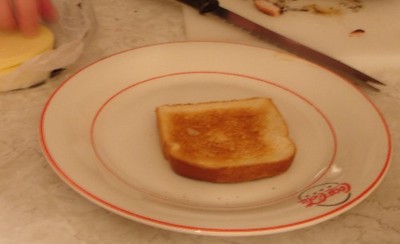 Step 4: P ut a piece of the sliced provolone cheese on the toast (I know this is a technical and difficult process but stick with me here). 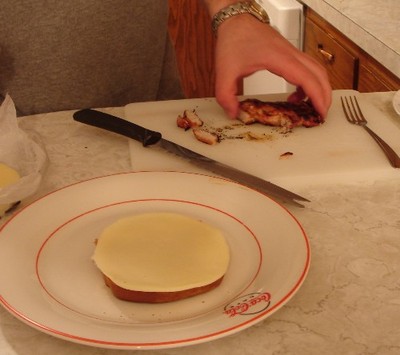 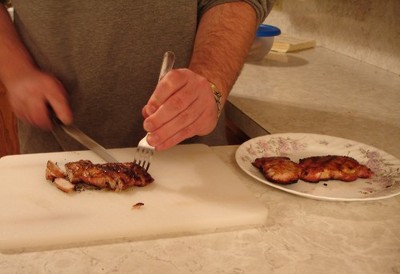 Step 6: Put strips of chop on the piece of toast and cheese, using the grab and plop technique. 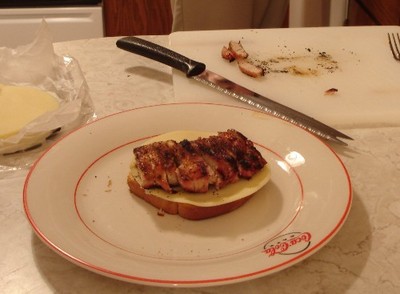 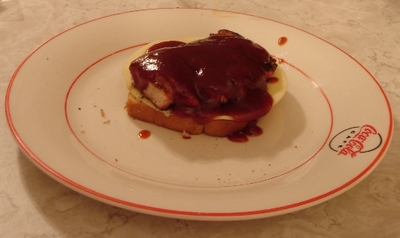 This is really where a lot of the flavor comes from. I use Famous Dave’s Rich and Sassy BBQ Sauce . If you haven’t had Famous Dave’s you should at least give it a try. {Side note: “Famous” Dave Anderson has a lake home on Round Lake about 3 miles from where we live. I have had the chance to meet him on several occasions including one night after midnight when I stopped into our local grocery store and he was shopping at 12:30 in the morning. Dave started Famous Dave’s of America restaurant chain and later was appointed by President G.W. Bush as the head of the Borough of Indian Affairs in Washington DC. (an agency with over 10,000 employees) end side note}

Where was I? Oh yeah, make sure the bbq sauce is very hot so it melts the cheese. Serve as an open faced sandwich. The 2 mistakes I have made when making these are 1. Leaving the meat on the grill too long till it is too dry. And 2. Not putting enough BBQ sauce on top.

Well that’s it. See, I told you it was a simple recipe.

May you always be surrounded by good friends and great food.