Posted on November 13, 2013
Filed Under Chicken and Turkey

You know how certain words make your mind immediately go somewhere? Well, Southern Fried Chicken does that to me. I picture a diner in the south with a comfy waitress who reminds me of Grandma and calls all her customers “Honey” and has a smile that warms the entire place and makes you want to come back again. Right after that, I think of my friends in Macon, MS. Yep, I think of you guys instead of FL or anywhere else in the south.

Here was our menu for supper. 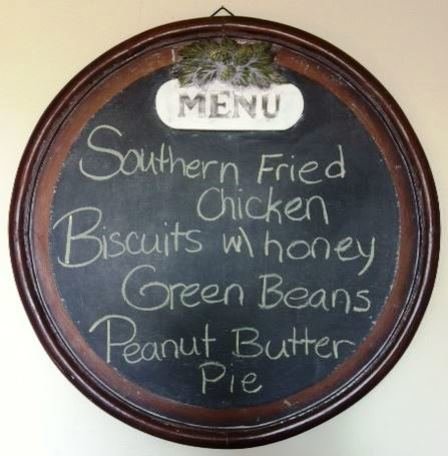 This chicken recipe is kind of a concoction of different recipes and things I’ve heard/learned. So, I’ll just write it all in one concise recipe and you can change it up even more if you want.

Southern Fried Chicken
2 lbs chicken breast cut into strips (they fry faster if you cut em up, I cut each piece into about 3 pieces)
1 cup buttermilk
1 cup flour
1 tsp. salt
1 tsp. pepper
1/2 tsp. paprika
Light olive oil …Yeah, I’m serious, olive oil. It’s healthier and it keeps the chicken from being too greasy. Just make sure it says light-tasting on it.

A few hours before supper, put the chicken breast and buttermilk in a big Ziploc bag. Mix it around a bit to make sure all sides of all the pieces have been coated in the buttermilk. Put the bag in the fridge.
Dump oil in an electric skillet and turn to 350 to get it to heating. Mix the flour and seasonings in a bowl. Take the pieces out of the buttermilk bag and coat them in the flour mixture. 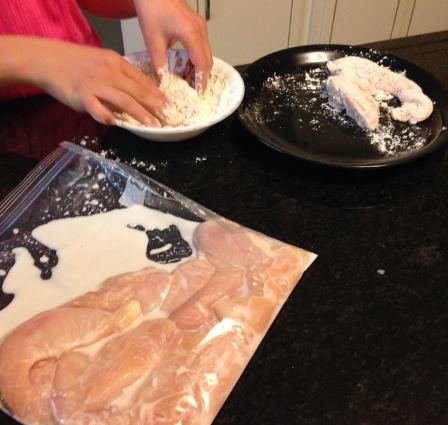 When the light goes off on the skillet, put in a few pieces. Don’t put too many in at a time or the temperature of the oil will go down too low and oil will soak into the chicken. Fry 4 minutes on each side or until the internal temp is 170. 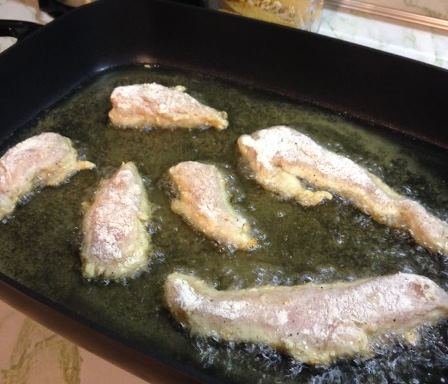 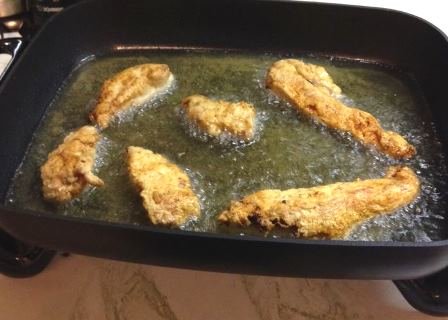 Transfer them to a paper-towel-covered plate to drain. To keep the first batch(es) hot while you’re finishing frying, you can put them in a warm oven. I only had 2 batches, so I just stacked them together after they had drained and then covered them. They stayed nice and hot.

We ate them with BBQ sauce and Ranch dressing… not at the same time. But just now that I’m thinking about it, I think I’ve heard that those 2 mixed makes a really good sauce. I’ll have to remember that next time. Honey mustard is another good option.

This meal was on the table in about 1/2 hour from walking into the kitchen. Well, the pie was made ahead of time. Lexi (she’s 10 now) started on the chicken flouring while I mixed up the biscuits. Then I started frying while the girls (yes, all 3) cut the biscuits… can you say “flour on the ceiling”? Just kidding, but there was definitely some on the floor. And the green beans were easy, just cooked and seasoned. 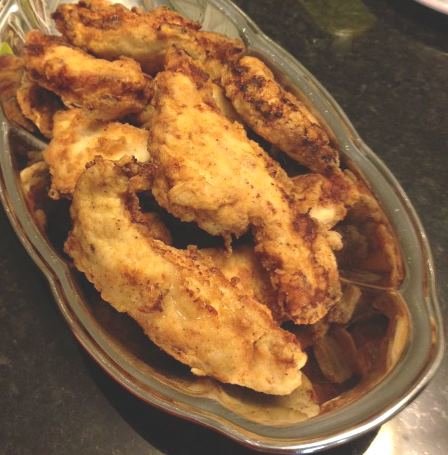