This is just going to be a miscellaneous post of 12 pictures that have to do with kitchen/cooking/eating that happened in the last few months. It’s called catch-up.

These incidents fall into one of 2 categories:
1. Not important enough to merit their own post.
2. Happened too long ago that a whole post on them now would be like digging up old bones.

I didn’t know I was going to do this post, or I would’ve just thrown my Before/After picture in this list because that whole deal was a bit embarrassing in the previous post. I’m not going to keep talking about my diet in future posts, but I do know that getting it out in the open now definitely makes me feel more accountable, which is a good thing.

First up is a birthday cake by Lexi and Tiffany. Lexi is 8 and Tiffany is 4. This was this past January and since then, Tiffany had a birthday and turned 5… her ladybug cake will be featured sometime soon. But here, it was Shannon’s birthday. The cake was Lexi’s idea, so I let them have at it. It’s a chocolate sheet cake with peanut butter icing… because a sheet cake would give them more room to scribb—oops, I mean, decorate, than a 9×13 would. I helped with the baking and spreading the frosting, but they did ALL the decorating. Lexi made the smiley face and the heart and did all the writing… meanwhile, Tiffany did the picture down in the corner (yeah, not exactly sure what it’s supposed to be, but I think I can make out a person on the left of it). Lexi was surprised how hard it is to write with frosting. ???? 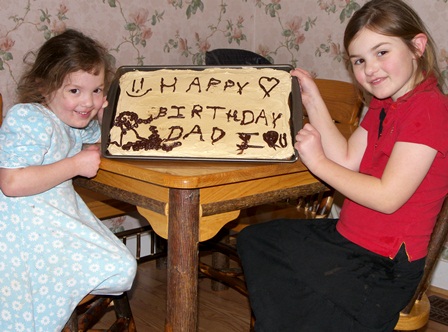 The other day, Tiffany purposefully went to her room, got her apron on, then came to me and said, “Mom, the ONLY thing I ever eat is cupcakes. So… *pause* can I have one?”. Could YOU have said no? Me neither. 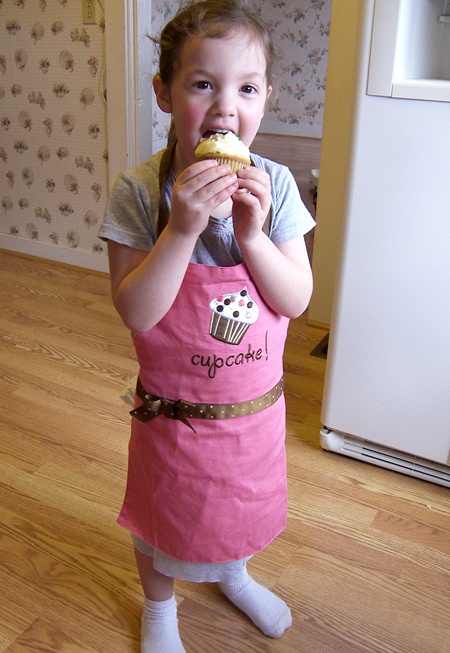 Tiffany was playing with her little doll named Paige while drinking chocolate milk. She thought it was so cool that Paige would stay hanging when she’d let go of her. (And no, she doesn’t have her eyes closed like it looks.) 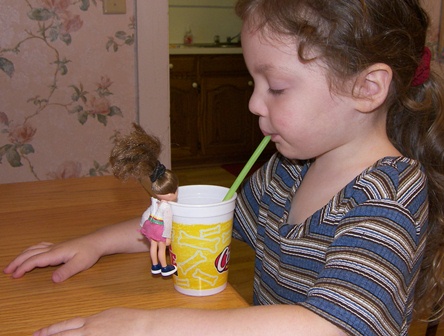 A random kid snack, all happy and yummy… 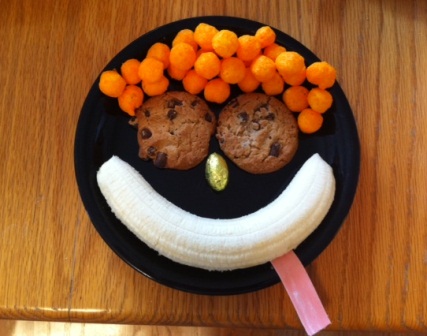 This is a window in my mom’s kitchen/dining room. At Christmastime, she took all her grandchildren over to it and sprayed some spray-on “snow” over their one hand (and then washed their hands right away). Long after they were gone back to Pennsylvania/Missouri/Ohio/the other side of town, she still had this little souvenir on her window. 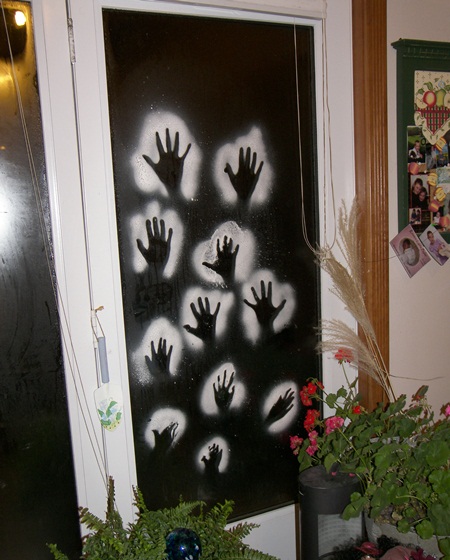 Here is some monkey bread that I made one lazy Saturday morning earlier this year that I never featured. And now, I’m not even sure what recipe I used! It got rave reviews, but really, you can’t go wrong with biscuits, butter, brown sugar, and cinnamon, can you?! 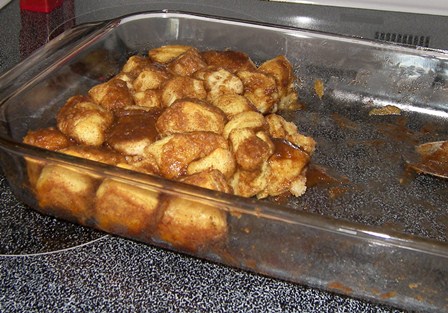 This is a pie from one time a few months ago when I NEEDED a chocolate peanut butter fix NOW. I pulled a baked pie crust out of the freezer, spread a layer of peanut butter on it, filled it with some instant pudding, put chocolate and Cool Whip on top, sprinkled it with Nestles powder, and TA-DA! I had a ready-to-eat-pie in 10 minutes flat! 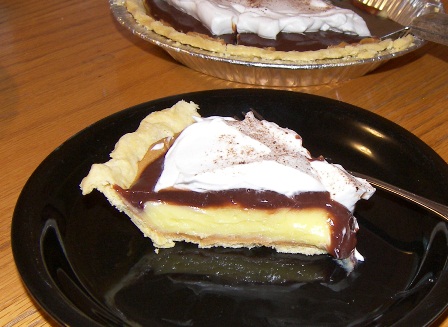 Here are some sour cream cookies that I made last week that didn’t make the cut, according to my food critics who live here. Here’s what I wrote beside this recipe in the cookbook: “Kinda dry. Don’t make again. Good, but with a million other cookie recipes out there, don’t bother with this one.” 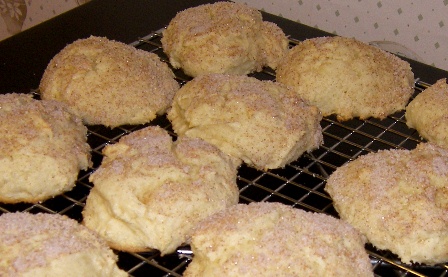 Here are some of my scrapbooking buddies of yesteryear… Ruthie, Linda, and Liz. We moved to Ohio a couple years ago and went back for a visit to WI this past year for Christmas, so of course we girls had to work a good-ole-days catch-up evening in. Well, ok, we got together the next day, too. This particular evening involved restaurant-hopping. Shannon and I went on a double date with Ruthie and her husband. Then, when we were done there, our men dropped us off at this restaurant, where Liz and Linda were waiting for us at a cozy table by the fireplace. We got dessert here. Then, this restaurant closed at 10:00, so we went over to McDonalds, which closed at midnight. Welcome to Small Town, where 24-hr businesses are hard to come by and Main St rolls up its sidewalks at 5:00, but aw, is it ever cozy and friendly! Even the policemen are friendly, we found out. Heehee. Ok, I won’t go into that or say which one of my friends was driving, but it turned out well because no speeding tickets were involved… the I-was-just-talking-to-my-friends-and-not-watching-my-speed explanation worked. 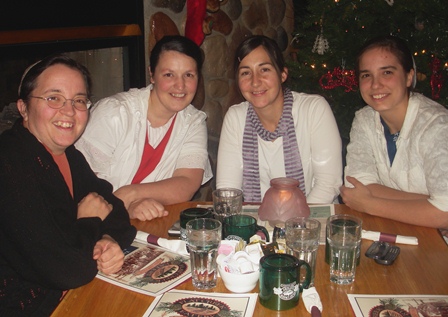 Here was our SuperBowl party cake. The cake was sweeter because we had cake and ice cream after the game was over… the sweet taste of victory. 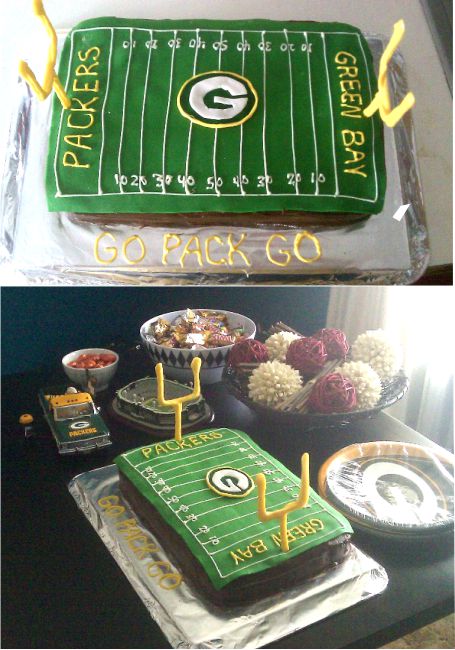 I saw Pioneer Woman several weeks ago! She was in Columbus on Feb 19. I didn’t take my camera, so these are with my phone. It was a bit surreal, I’ll have to say! On the talking picture, I was probably saying, “I CAN’T believe I actually get to SEE you!” I forget what all I said, but I do remember saying that.

And last, but not least, here’s Megan. She’s 10 months old. She doesn’t get enough to eat, so she has to supplement her diet with Princess tiaras. 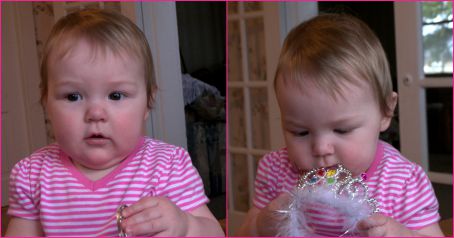