Posted on January 8, 2009
Filed Under Side dishes, Snacks

Ok, so I get an F on making mozzarella sticks! About half of them had melted cheese running out. The taste, though, gets an A+!

I’ve had an eye on this recipe for awhile and I’d buy string cheese and before I got them made, the string cheese got eaten, so I’d buy another pack of string cheese, and it would get eaten again, and so on. String cheese is a great snack, especially if you need a snack on the run… the pieces are individually wrapped, so you don’t have to waste time putting it in a snack bag or anything.

Just to clear the air a bit, in case you’re wondering why I’m posting non-diet things, I did figure out how many calories these little things have… it’s 80. 80 calories each and they’re only about 2″ long! And you can eat one in 2 bites.

But it is a really yummy 2 bites! 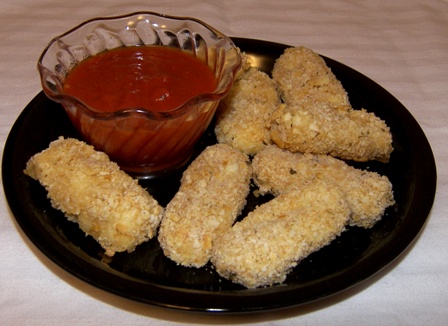 This is the cheese I used… 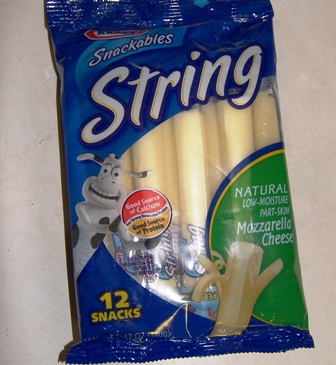 Remove cheese from packages; cut each cheese stick in half crosswise. 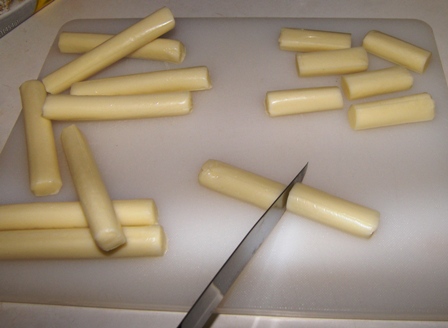 Combine flour and cornstarch in a shallow dish. Beat egg whites and water in another shallow dish until well mixed. Combine bread crumbs, oregano, and salt in a third shallow dish. Coat cheese with flour mixture. Dip into egg white mixture, being sure to coat thoroughly, including ends. Coat with bread crumb mixture. 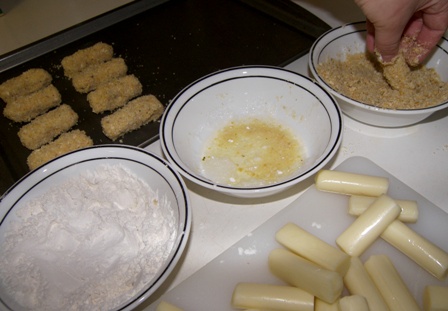 Dip into egg whites and bread crumbs a second time, being sure ends are coated. I ran out of the egg white mixture AND the crumb mixture and had to make more. The flour mixture looked like it barely had a dent in it! Place on ungreased baking sheet.

Freeze at least 1 hour. Preheat oven to 400. Drizzle cheesesticks with melted butter. Bake until crumbs just begin to brown, 5-7 minutes.
Oh, no!!! Cheese all over the place! 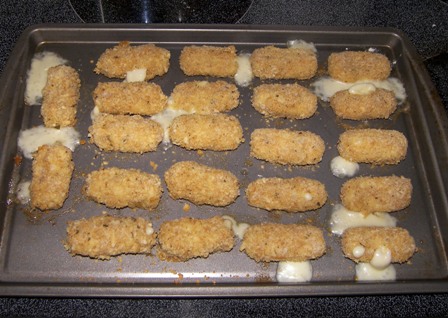 Here is what happened: I totally forgot the ‘drizzle melted butter over them’ part and took them out of the freezer and put them in the oven. When they were in for about 5 min, I suddenly remembered the butter! So, I got them out and drizzled butter over them. At that point, no cheese was showing. I put them back in for another 5 min so they could brown and this is what they looked like when I got them out again. I thought of waiting and making them again before featuring them, but decided you might as well know that I make plenty of mistakes (some of which I can hide though ???? ).
Serve warm with marinara sauce. 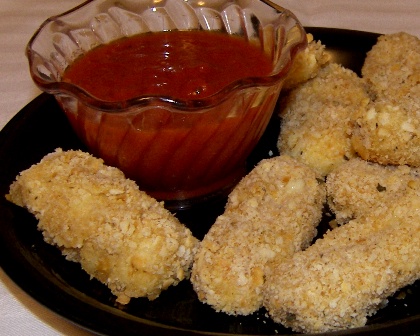 This recipe came from an Easy to Bake Easy to Make recipe card. A tip on there is: “Since these must be frozen before baking anyway, keep several batches in the freezer and bake them whenever you need a quick snack.” Sounds like a great idea for spur-of-the-moment company! Or if you need a quick side dish to go with a meal. Last night, I served them with Hearty Hamburger Soup (to be featured later) and biscuits.