Now I want to open a bakery again. This happens every year. I bake a bunch of stuff for a bake sale and love it so much that I dream of opening a bakery. I could bake to my heart’s content. And people would come and pay me for doing it. But I don’t want to be that tied down and another major thing is I’m not sure exactly how bakeries make money! Must be the mass production and the wholesale ingredients.

I figured up my time and ingredient costs and if everything would sell that I baked, I would’ve made less than $4/hr. Yeah, my bakery would be a place of voluntary service and a non-profit organization. When I figured that up, it wasn’t figuring in heating, air conditioning, electricity, rent for the building, advertizing, appliances, or anything besides the labor and ingredients. Another thing that would help at a bakery is that it’s done every day… for example, I made 10 pie crusts (5 double crust pies) and by the 6th crust, it was going much faster than the first crust did!

So, yeah, I contribute to the bake sale because I love to, not to make a bunch of money. I’m kicking myself for not taking a picture of everything all sitting on the counter ready to go. Maybe I didn’t think of it because it wasn’t all sitting on the same counter ready to go all at the same time. But, I did the same 4 things as I did last year (monster cookies, apple pies, rice crispy roll, and fudge), so the picture would’ve looked about the same as last year’s picture. Here’s last year’s post.

I did get a couple pictures of the pie operation…

This first one was taken sometime between 5:30 a.m. and 6:00 a.m. this morning. I was going to do a self-timer picture and be dutifully peeling apples, but then I thought about it that I was in my pjs, so I just stayed behind the camera instead. 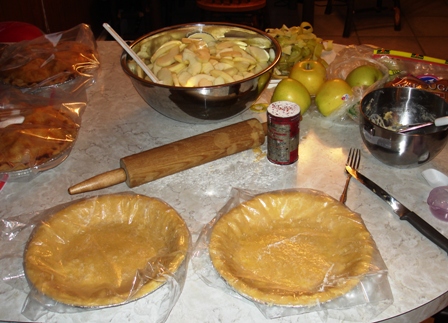 Here are the pies in the oven, almost ready to come out. 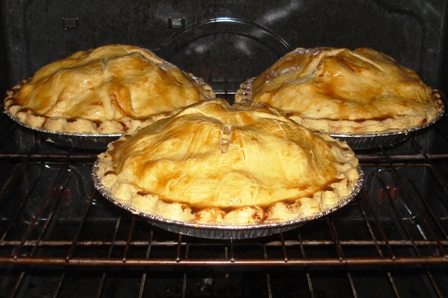 See ya later. If you need me, you’ll find me in the kitchen eating monster cookies…

4 Responses to “Baking up a storm”