Have any of you ever been in charge of the kitchen at a wedding? We were for the first time last Friday evening. My cousin Lisl got married. It was actually an easy meal for amateurs like us to start out on… hot ham and cheese sandwiches were the only menu item that needed to be hot. The other things on the menu were: veggies and dip, chips, fruit and chocolate fountain, and of course cake and ice cream. 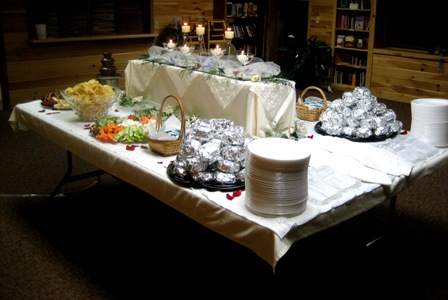 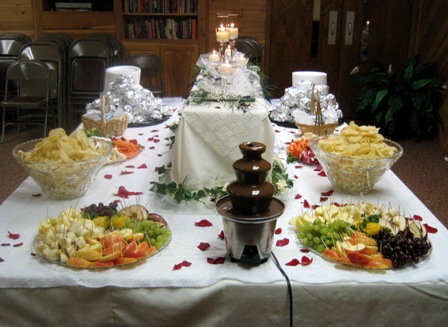 I’ll start with Thurs. That’s the day that the veggies and fruit got cut up and the sandwiches made…

We put the cut up veggies in either buckets with water or a sealed plastic bag. The apples were dipped in pineapple juice, put in sealed plastic bags and still looked great at serving time the next evening. We washed and separated the grapes in clusters. We didn’t do anything to the bananas on Thurs. They had to be done last minute (as in during the wedding).

For the sandwiches, we buttered the buns, put 2 1/2 oz of shaved ham on and a piece of cheese, then wrapped them in pre-cut foil squares, and put them in the fridge. On Friday, we got them out of the fridge a couple hours ahead of time, then put some in roasters at 250 for 45 min. and some in the oven at 225 for 1/2 hour. We actually turned the heat up a bit part-way thro’ because it sounded like the preacher was winding down early, so they actually got done before the time we were planning.

The way the wedding was set up, the guests dismissed from their seats at the ceremony, went thro’ the receiving line, then thro’ the food line, then sat down with their food where they had been for the ceremony. So, the food had to be ready at Amen! We actually didn’t see the couple get married, but I’m assuming they did.

Here’s how the wedding was set up: 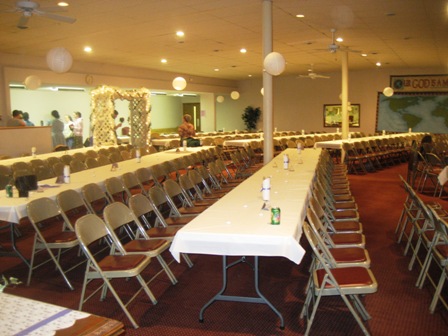 The chairs on one side of the table were turned around so all chairs were facing the front. Then when the guests came back with food, the servers had turned their chairs around to face the table to eat.

The kitchen staff was my husband and I and my brother and his wife. I was the one with all the info from the bride and the mother-of-the-bride, and what a wild couple of hours it was! It actually went good, but man, talk about intense! And I’m not an intense person! Anyway, needless to say, my camera was the least thing on my mind (didn’t even get a picture of the bride and groom!). BUT, there was about a 30-second lull between the time when we were totally ready till we expected the first guests to come thro’ the door, so I snapped a couple pictures of the buffet table (they’re the ones close to the top of this post).

I know they say a picture is worth 1000 words, but I’m seriously lacking pictures, so I’ll have to do snapshots with words…

*Click* In this picture:
Directed at me: “We’re running out of cups for the punch table. Where are some more?”
Me, scanning the countertops in the kitchen: “I lost track of them. I don’t see them in here anymore. Go check around or under the punch table.”
He goes out of the kitchen as I’m still frantically looking for cups, then sigh as I hear, “We found them.”

*Click*
“Hey, the dip is getting low in the veggie tray.”
“There’s no more left.”
“Are you sure?! Did you look behind everything in the fridge?”
“There. is. no. dip. left! How long is the line yet?”
“It goes back to the arch and that’s it then.”
“Good. I think what’s on the table should reach then.”

*Click*
One of the servers: “We have guests at our table who want to leave and they want their cake and ice cream now.”
Me: “Not all the guests even got thro’ the line for the main course, we’re not serving cake and ice cream yet.”
Him: “Well, shall I tell them they have to wait?”
Me: “Nah, go ahead and give them some.”

*Click*
“Oh no! Look at the chocolate fountain! It’s overflowing and not augering up anymore.”
“Get some paper towel!”
“What do you think is wrong? Do we need to add some more oil?”
“No, I think it looks thin enough.”
A young boy was kinda hanging around it and he said, “Well, I know a banana fell in there.”
“Ah, thanks, kiddo. That may be the info we need!”
After digging around in the base with a spoon, my SIL said, “I dug a banana AND an apple slice out of there!”
Once again, the chocolate fountain is flowing smoothly.

*Click*
Things are wild. 3 people talking to me at once and I hear someone calling “Kaaaay” behind me. Meanwhile, the photographer is milling around in the kitchen snapping photos and video clips. I was spooning dip and felt like throwing the whole spoonful at his camera! I know he was just doing his job, but there are sometimes when, job or not, you just are NOT in the mood for some things!!!!

*Click*
The lady in charge of the facilities asked, “Who is the mother of the bride? Has she been back here in the kitchen?”
Me, in a daze, plus trying to think how to describe Arla, “Um, I don’t know. She has a blue dress on.”
Pause.
Her: “Honey, 75% of the women around here have a blue dress on!” (Blue was the wedding color.)
Outburst of laughter from everyone in the kitchen.

It actually went good, I guess at any wedding over serving time, the kitchen is probably hectic with getting all the food ready at once and keeping 9 sets of servers going.

3 tips that I have from this whole deal is:

1. Plan for the food to get done earlier than you think it should be done by.

2. If you’re in the kitchen, bring other shoes along to change into at cleanup time. Being on your feet that much, the change would’ve felt wonderful!

3. If you’re planning your wedding, assign the cooks (if it’s not catered), and also assign several more people to come in with fresh energy at cleanup time. When everyone was served and there were a couple extra plates of cake and melting ice cream, I felt this big sigh of relief. But yet I felt like crying… I’d been on my feet for 5 hours and everything was sore and I was drained! And it was cleanup time. Two and a half hours later, we had the kitchen shining, the dishes washed, and the floor mopped. God bless those servers who stuck around to wash dishes and that guest who breezed in with the picture of energy and said, “I’d love to help here. Just put me to work!” There were definitely some people who were wearing halos till everything was over. I won’t mention names, but some of them were the helpful people I just mentioned.

Have you ever been at a restaurant where everything just flowed perfectly? The drinks and waitress came as soon as you were seated, the perfectly grilled steak came just as you were sitting back after eating the appetizer, refills came when there was still 2″ left of your Diet Coke, the staff was relaxed and everything seemed to work like a well-oiled machine. One day though, that restaurant had its opening night… the staff wasn’t very comfortable, some food was dropped in the kitchen, the appetizer came with the meal, and things seemed a little choppy.

I think every wedding is like opening night at a restaurant… the cooks aren’t familiar with the kitchen, the servers don’t even know each other, the cooks have never had to have 400 sandwiches ready to go at one time before, the servers look tentative, and some kid drops a banana and an apple in the chocolate fountain.

9 Responses to “400 ham sandwiches, a beautiful bride, and a wild-eyed cook”