Sigh! This site is sadly lacking in attention! Or maybe you noticed that. Or maybe your summer is busy enough that you didn’t notice it. Yeah, I hope that’s the case.

Maybe you put up a KITCHEN CLOSED sign over the summer. I might as well have done that!!!
I want to get back into cooking and baking more and just let the spiders and clutter and kids take over the house and just let stuff fall out of the closets when I open them and let the weeds grow in the garden… oops, I don’t have a garden, and let the fingerprints on the windows and throw dieting and exercise to the wind and just bake and cook and eat to my heart’s content!! Ahhhhhhh!

I haven’t made anything lately worth documenting!! And when it was worth documenting, I was in a tearing hurry (always in a hurry!) or my camera batteries were dead (that was some delicious moist cheddar biscuits that I made last week and I had no AAs in the house!) or I had already featured it. Like, the ham… 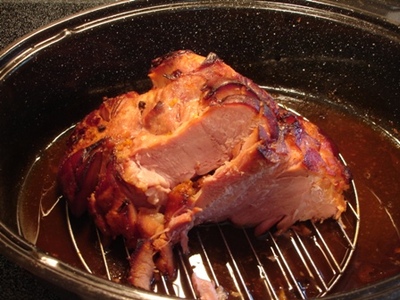 That is just the easiest thing to make and it makes a splendid meal. And one 6 lb. bone-in ham is big enough for 3 meals for us… Make the ham and cut slices off for the meal. Then after you’re done eating, cut as many more slices off as you can and that’s enough for another meal. Then, get the rest off (little pieces) and save them to throw in a casserole or soup (3rd meal). I just throw the frozen leftover ham slices in the crockpot with a bit of water and it’s good and moist and so handy… its already sliced!

Our most common supper is chicken breast, veggies, and either potatoes or rolls, but often both. The chicken breast is either done on the grill or in the frying pan. I don’t bread it, just thaw it in the microwave if it’s frozen and fry it or grill it (with seasonings), then we eat it with Famous Daves BBQ sauce. We have this at least once a week. And it’s so common that I never took a picture of it! Do you have a favorite or common meal that you often make? Or maybe you’re an adventurous cook who rarely makes anything twice.

I have a few contests in mind to choose from, but I need to figure out details like judges and if I’m gonna make each recipe to test it or what! For example, a ‘best cookie’ contest… if even 10 of you would participate, we’d have cookies sticking out of our ears around here! So, more contest info later.