We had a brunch for Lexi’s 4th birthday party, then she opened her gifts and we had the cake and ice cream closer to noon then. I tried a new recipe for the brunch. It was a hit!!! I was replenishing the fruit tray and the eggs and was going to eat after everyone else was done… until… people started coming out for seconds and saying “these rolls are awesome” type of comments. So, I got a plate and got a roll before they got all. They were soooo good! My mom copied the recipe down and my mom-in-law confirmed that I would put it on this site and said she’d get it then. So, this is something I will DEFINITELY make again and it wasn’t just the taste I liked… they were so easy to make too. By the way, if you remember back around Thanksgiving, I was planning to make these T-giving morning, well, it didn’t happen then, so here they are finally!

The recipe comes from my friend Shannon. 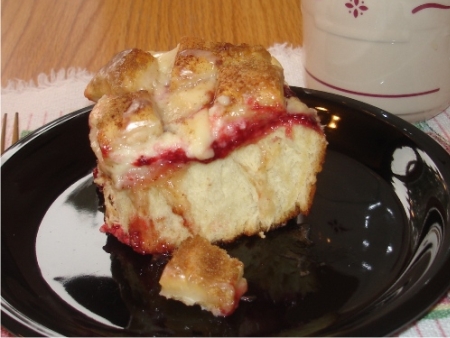 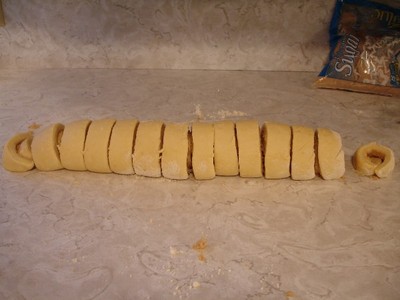 Tips for cutting rolls: I use a string… slide it under the rolls, bring the ends up over, cross them and pull, and it makes a nice cut without smashing… ok, maybe everyone cuts rolls like that… I learned it from my mom. Also, to get them an even 12 pieces, cut in the middle first, then each section in half, then thirds from there (if you count my pieces, there are 14 because I cut the ends off first). 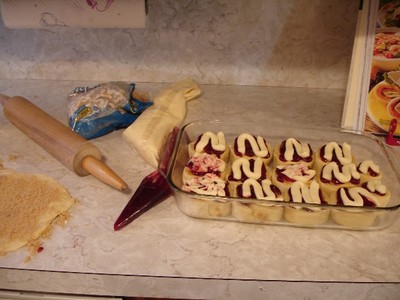 I piped it on, then tried to swirl them together with a knife, but as you can see, it didn’t get too good. I stopped after doing 3 and just left them like that.

Edit: If you don’t have access to the cream cheese filling, try this:
8 oz softened cream cheese, 1 egg, 1/4 cup sugar, and 1/2 tsp. vanilla. Beat till smooth. Put it in a plastic storage bag (or a decorating bag), cut the corner off, and pipe it onto the rolls.

Roll out the rest of the dough. Spread with butter, brown sugar, and cinnamon and cut into small pieces. Lay on top of filling. Let rise about an hour. 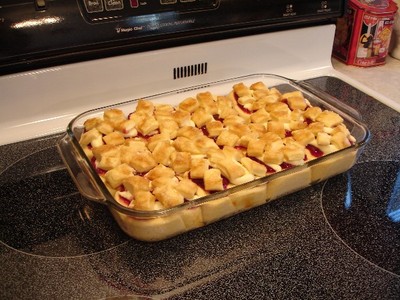 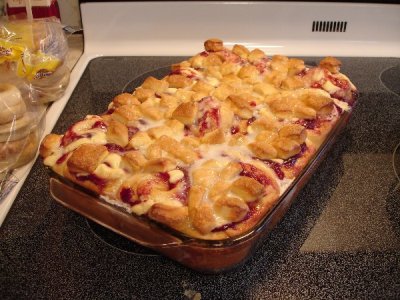 They sorta billowed out of the pan… maybe because I used the 2 ends after all. I drizzled the glaze on right away and it kind of melted and pooled. Next time, I’ll let them cool for a few minutes first. Madisonsmom2, I don’t know if this looks like yours did. ?????

Edited January 2012 to add: I often put about 3 rolls in a different small pan so the 9×13 doesn’t billow over. Also, I often make them the evening before, put them in the fridge overnight (unbaked), pull them out of the fridge and put em in the oven, then turn the oven on. I don’t preheat the oven if I’m pulling them out of the fridge because I’m afraid the cold pan would crack on the hot oven rack.

Anyway, they were just scrumptious and another great thing about them is that the dough was not at all sticky! I didn’t get my hands or the rolling pin messy. I could just roll on top of it without it sticking to the rolling pin or the counter!!!

Here is the rest of our meal… 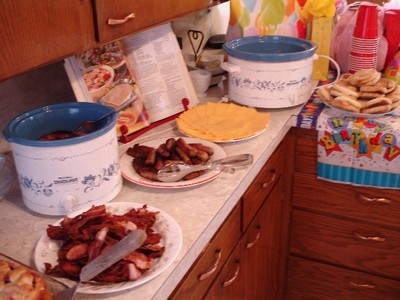 Ham is in the closest crockpot, eggs are in the farthest crockpot… we just used those to keep them warm. I should’ve made a sandwich and taken a picture of it… didn’t think of it. 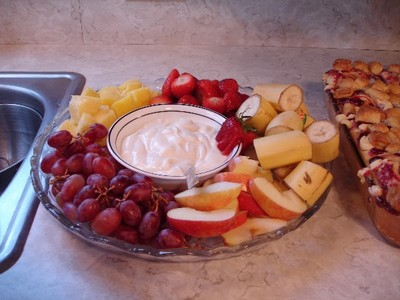