Next to the thing of this being a cozy delicious Fall-ish drink, you know what the best thing about it is? It tastes for all the world like it has pumpkin in it… but it doesn’t! Here’s why that’s so great: I would have to open a whole new can of pumpkin puree just to get one little spoonful out to stir in here because most of the time, I don’t usually have open cans of perishable pumpkin puree on hand in my fridge.

Oh! I just had a lightbulb moment! (which is very noteable because it’s 5:20 a.m. and at 5:20 a.m., thinking thro the fog on my brain is a stretch, much less a lightbulb moment going on!) You could freeze little dollops of pumpkin puree in an ice cube tray, then they’d be ready in the right quantity to pull out at will. You could do that when you freeze or can your pumpkin puree each Fall. Notice I’m pretty much just using the term “you”… I did pumpkin puree 3 years ago and decided it wouldn’t be on my list of things-you-can-buy-in-the-store-but-the-do-it-yourself-mess-is-worth-the-extra-good-taste. The only 2 things so far on that list for me are sweet corn and strawberry jam.

You know, I was just thinking about that lightbulb moment… it wasn’t so bright after all because this recipe doesn’t even take pumpkin puree! It’s like answering a question that was never asked! But I’ll just leave it there in case you want it or in case it would spark some other cool idea for mini serving sizes in ice cube trays… like right now I have bacon grease frozen in one and next time I need to fry something, out of the freezer and into the pan it goes. Wow, I think we’re taking a nature hike on a bunny trail! Where was I?

Pumpkin spice lattes. In case you’re picturing me curled up in a blanket on the couch in pjs typing on my laptop with one of these lovely lattes steaming in a cup on the end table, you’d be wrong. Well, it’s right until you get to the latte part. I had full intentions of sipping one while writing this, but then I thought about the blender… and then I thought of it possibly waking the kids. So, I thought of taking the blender outside, but that seemed a little desperate. And cold. Then, I thought of taking the blender into the office/exercise room… but then I had flashbacks of making this latte yesterday afternoon………………..

I poured the scalded milk into the blender, put the lid on, and pressed the button. I also subconsciously knew that my 15-month-old was running into the kitchen. The next moment was a blur of thoughts about scalded milk flying thro the air and what if it hits the baby. The moment after that was relief that none hit the baby and the baby purposely splashing in warm milk puddles on the floor.

……………….Now, back to the present. I do try to learn from my mistakes and hoped this crazy scenario wouldn’t happen again, but on the off-chance it would, I decided that maybe I shouldn’t take the blender into that room. I pictured milk potentially all over Shannon’s desk and dripping off the treadmill and soaking down into the carpet… because I wasn’t totally sure what mistake I had made to know how to fix it. My guess is that hot liquid going at high speeds in a small airtight space creates pressure. I just never blend hot stuff… next time I’ll try doing only 3/4 cup or so at a time or putting the lid on loosely and putting a towel over the whole works. Or both. It’s gotta be blended though because it’s gotta be frothy! What’s a latte if it’s not frothy?!

Also this morning, I was planning to take progress pictures and a decked out with whipped cream final picture, and I still might do that, but I probably won’t post them today because today is going to be crazy… I have 3 things planned, none of them overlap, none of them are at home, and they’ll probably take an average of 3 hours each. But I’ll edit those pictures in later. 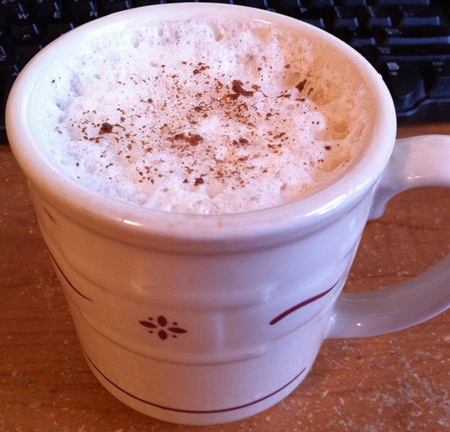 Pumpkin Spice Latte … recipe from my friend Dinah (Thanks, Dinah! This recipe is a keeper for sure! Especially at this time of the year!)

2 cups milk
2 tsp. sugar
1/2 tsp. pumpkin pie spice
1/2 tsp. vanilla
1/3 cup double strength coffee (I used just regular strength, but I’m kind of a coffee wimp… if I ever tell you “You’re the creamer in my coffee”, that would be a very good compliment to you. ???? )
Whipped cream, optional

Heat milk til there is a skin on top (scald it basically). Pour it into the blender with the sugar, pumpkin pie spice, and vanilla. (Dinah said if you don’t have pumpkin pie spice, just dash in cinnamon, nutmeg, allspice, and ginger til it tastes right.) Blend just until frothy, then fill two mugs about 3/4 full. Add coffee to each mug. (Dinah said she made hazelnut coffee and that added a special taste of its own.) Put whipped cream on top, then sprinkle more pumpkin pie spice on top. I didn’t put whipped cream on when I made it yesterday because I didn’t have Reddi-Whip on hand and there was no Cool Whip thawed in the fridge and I wanted to enjoy my latte NOW.

Here’s my take on this recipe: I was honestly surprised how good it was! I’ve seen and tried alot of “coffee shop knock-off” recipes and very few of them were worth making, I thought. This one is a winner, though. I’m not gonna mess with it too much because it’s close enough to perfection as is, but one variation I thought of is replacing the sugar and vanilla and 1/4 cup or so of milk with 1/4 cup of French Vanilla creamer. I also think I’ll up the pumpkin pie spice quantity just a little next time. And then there’s always the add-pumpkin-puree option. ????

Please make this… it’s quick and easy and uses common ingredients and it’s handier than Starbucks. You know you want a cup!