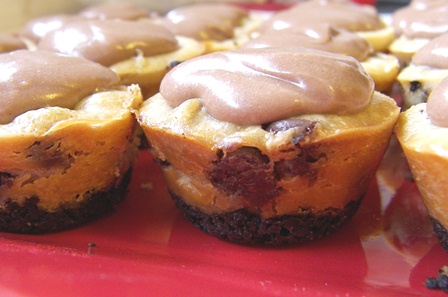 One thing I like about this is that it’s a small recipe. Say you have a family of 2 adults and 3 children, one of which is less than a year old, and the one adult isn’t addicted to all things chocolate/peanut butter/cream cheese, and the other adult isn’t supposed to be eating more than one serving of such things. Well, this recipe doesn’t make a whole big cheesecake. It makes 24 mini cheesecakes, plus a little more.

I originally saw these on Annie’s Eats  and I’ll admit that what grabbed me about them was exactly the part that ended up flopping on mine! It was the beautifully done ganache on top. Well, my ganache flopped (but I’m not giving up, I do want to make it successfully sometime), so mine have more like a puddle of chocolate instead of a twisty gourmet mound of chocolate. But I just switched my focus from beauty to taste and it all turned out great then! I wanted a bit more chocolate in them, so I added some chocolate chips to the batter (smart move! ???? ). To make up for the added chocolate, I backed up the ingredient quantities for the batter, which worked out well because then I didn’t have to break open a second package of cream cheese. So, for the original recipe and to see the gorgeous ganache, go to Annie’s site (Thanks, Annie! You are very talented and you have a lot of awesome-lookin desserts on your website!).

I’ll post the recipe how I made them with my beloved extra chocolate. ????

Preheat the oven to 350.  Spray a 24-well mini muffin pan with cooking spray.  Annie says that using a silicone pan works best for removing the baked cheesecakes. I don’t have one, so I greased my pan well. It worked ok, but some of them got a bit messed up. Annie also said using mini cupcake liners would be another option. Combine the Oreo crumbs, melted butter, and sugar in a bowl. I know, the butter isn’t melted on this pic. I put the whole works in the microwave for a bit to melt the butter. 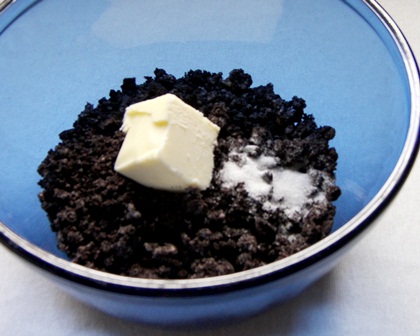 Mix with a fork until evenly blended.  Divide the crust mixture between the wells of the prepared pan, about 2-3 teaspoons in each.  Press the crumb mixture into a flat layer on the bottom of the well. I used a glass toothpick holder to press it down. Bake for 10 minutes.  Transfer the pan to a wire rack.

Reduce the oven temp to 300.  Combine the cream cheese, sour cream and peanut butter. Beat on medium-high speed until smooth and well blended.  Add in the sugar and mix about 1 minute more, scraping down the sides of the bowl as needed.  Blend in the egg, vanilla, and salt.  Continue to beat until the mixture is completely smooth.  Divide the mixture evenly over the cookie crumb crusts and smooth the tops slightly. Kinda looks like I didn’t smooth the tops. 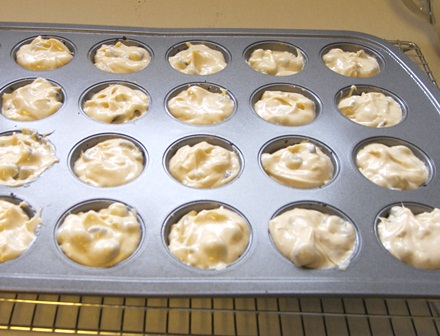 Bake for 22 minutes, rotating the pan halfway through baking.  Transfer to a wire rack and let cool to room temperature. 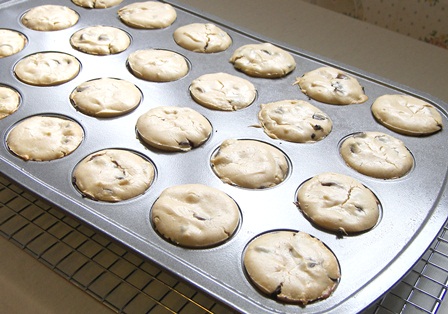 Once completely cool, transfer the pan to the refrigerator and chill thoroughly, at least 3 hours. Once the cheesecakes are chilled, carefully remove them from the pan. 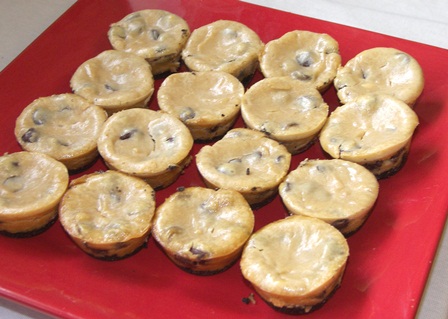 Place the chocolate in a bowl.  In a small saucepan, bring the cream to a simmer over medium heat.  Once simmering, remove from the heat and immediately pour over the chocolate.  Let stand 1-2 minutes.  Whisk in small circular motions until a smooth ganache has formed.  Whisk in the butter until completely incorporated.  Let the mixture stand at room temperature until slightly thickened for piping onto the cheesecakes. In my case, it never got thick enough at room temperature for piping, maybe because I didn’t use bittersweet chocolate, or maybe because I didn’t have unsalted butter. I thought maybe I should’ve whipped the cream and then added melted chocolate.

After I spooned it onto the cheesecakes and chilled them, it got stiffer, so having it to do over, I would’ve chilled the ganache, then piped it on. But I wasn’t about to scrape it all off just to do that. 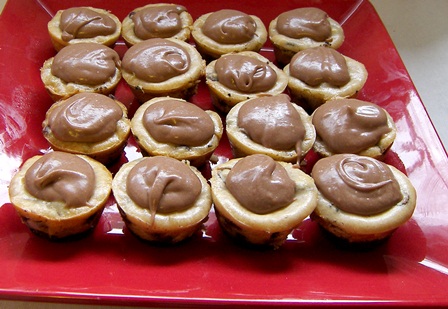 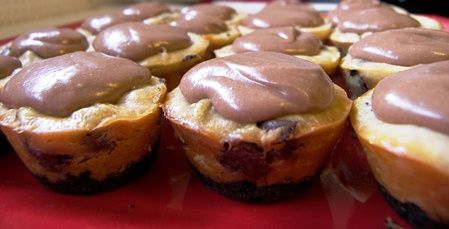 These work great frozen, too, like regular cheezecakes do. I froze a couple of them just to try it. They were good right out of the freezer, including the rock-hard chocolate chips ???? , but the ganache wasn’t hard. And after they thawed, they were just as creamy as before they were frozen. I don’t know how long cheesecakes can be frozen for… and I probably never will, what with them always calling loudly from the freezer and all, if I would actually have some on hand in there!

There was a bit of leftover cheesecake batter. My chocolate addition vs. scaling down the recipe wasn’t equal amounts. I didn’t want to just pile it on the mini cups because I wasn’t sure what would happen… I didn’t want an overflowing cheesecake mess in my oven! So, I got Lexi’s mini springform pan out. This pan, by the way, is about the size of my palm, just to give you an idea on the size. I didn’t feel like crushing more Oreos, so I put whole Oreos in the bottom of it, cutting 2 of them down to fit in with the 2 whole ones. Whole Oreos are a bit too big to fit in a mini muffin cup, but that would sure be handy if they would! Maybe it would work to cut them smaller with a sharp round cookie cutter.??? 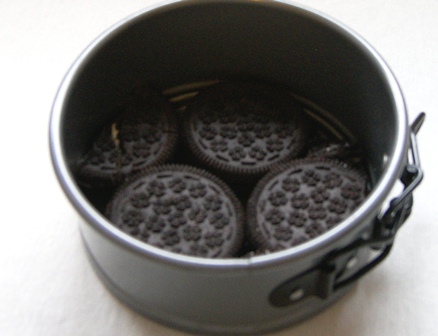 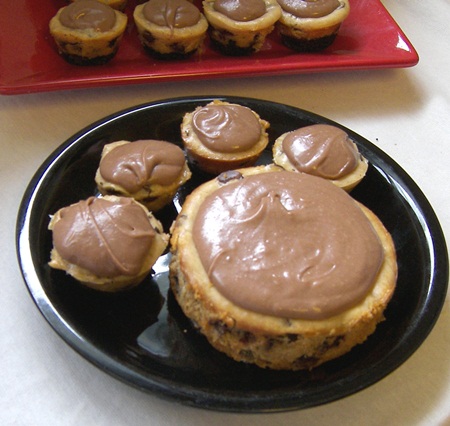 And here is the mini springform pan cheesecake. I just threw some of the little cheesecakes on the little dessert plate with it because they were extras just sitting around. Lexi came over to see what I was doing and exclaimed, “Mom! That is SO cute! You made a bear paw!”

So, there you go, bear paw cheesecake dessert.