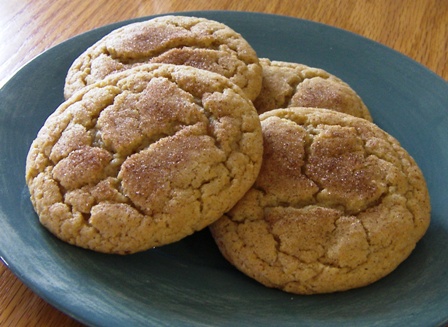 Ok, time to dust off this site again. For those of you who have come back over the last 2 weeks to check if there’s anything new, do you sorta feel like you’re getting to know Trevor?

We got a serious cookie craving awhile ago… Lexi said, “Mom, can we make cookies?” and I said “Sure!” and without another word, we both stopped what we were doing, headed for the kitchen and I went for the cookbooks and she pulled the flour out of the cupboard. That’s when you know it’s a serious cookie craving. If it wouldn’t have been, we would’ve just acted like that would be a good idea and say how we’d “sure like some cookies” and “maybe this evening we could make some” and then just went on with what we were doing.

The first problem was that we had no chocolate chips. The second problem was more serious… no eggs. There are LOTS of cookie recipes with no choc chips, but very few with no eggs. I thought of making Mary’s Cream Cheese Cookies. (The reason I thought of making those is because this exact thing had happened and after searching cookbook after cookbook, I had fiiiiiiiiiiiiinally found one without eggs.) I’ll bet you anything when Shannon reads this, he’ll wonder why I didn’t Google ‘cookie recipe no eggs’ or something like that. His brother Wendell will probably wonder that too. Now that I think of it, I kinda wonder too.

What ended up happening is that we have a brand new made-up recipe. Not usually what I have in mind when I say I’m gonna try a new recipe. I looked at the cream cheese cookie recipe this time and noticed there were no secret ingredients taking place of the eggs and I had sour cream in the fridge, so I combined and deleted some ingredients and changed a few amounts on a snickerdoodle and sour cream cookie recipe and here it is:

Cream sugar and shortening. Add dry ingredients alternately with sour cream. Add vanilla. Roll into balls. Flatten a bit. Sprinkle generously with cinnamon sugar. Lexi was in charge of putting on the cinnamon sugar and when she started loading it on, I almost said “Not so much!”, but just in time, I thought, ‘You know, that looks kinda good!’ And it was! 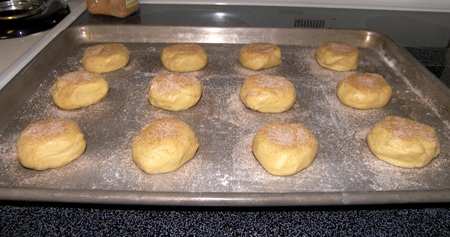 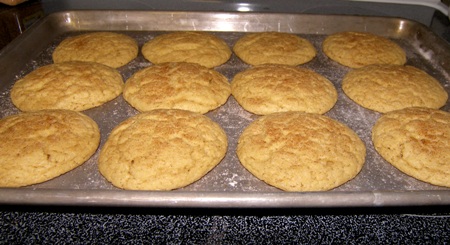 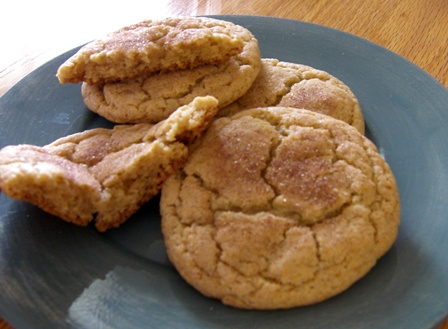 Look how soft they are. They’re nice and chewy, not crunchy.

Now I hope that I’m not out of eggs AND sour cream AND cream cheese when the next cookie craving hits. If so, we’ll have to settle for No Bake Cookies, which isn’t a bad choice. At all.

Ok, I’m off to Google ‘Why do cookie recipes have eggs in them?’ Or maybe I’ll Bing it. Just this week, I learned there’s such a thing as Bing.

9 Responses to “What do you get when you mix snickerdoodles with sour cream cookies, but don’t have eggs?”